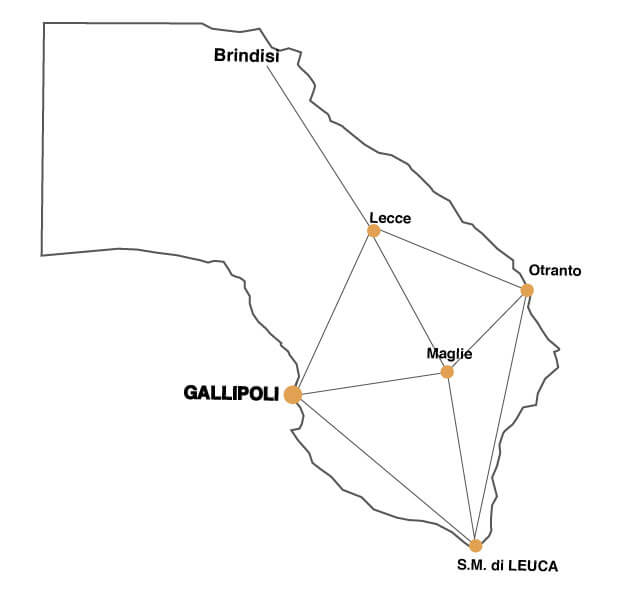 How to arrive to Gallipoli by car, plane and train:

• By plane to Brindisi (please see here all destinations https://www.aeroportidipuglia.it/homepagebrindisi):
in the airport you can find taxi, coaches to Lecce and the major car rental companies such as Hertz, Avis, etc.
Coaches will take you to the city terminal in Lecce, where it is possible to catch connections to Gallipoli. In Gallipoli you can use any car-hiring-service with driver avilable.

• By plane to  Bari (please see here all destinations https://www.aeroportidipuglia.it/homepagebari):
in the airport you can find taxi and the major car rental companies such as Hertz, Avis, etc. to reach Lecce you can take  utilizzare all departing trains to the central station of Bari (you can take the metropolitan train from the airport).

• By rail to the station of Lecce:
it’s possible to use the direct line of local trains to Gallipoli. In front of the Gallipoli station there are taxi and car-hiring-service with driver.

• By car:
Bari – Lecce freeway as far as the Lecce – tangenziale ovest Gallipoli exit. Carry on along the SS101 as far as the Gallipoli – Porto exit, then park at the port area and continue on foot.

• On foot in Gallipoli:
continue on the city bridge (LTZ passage) which connects the old and new parts of the city. At the end of the bridge turn left and take Via Antonietta De Pace (3rd street on th right) to the number 140.